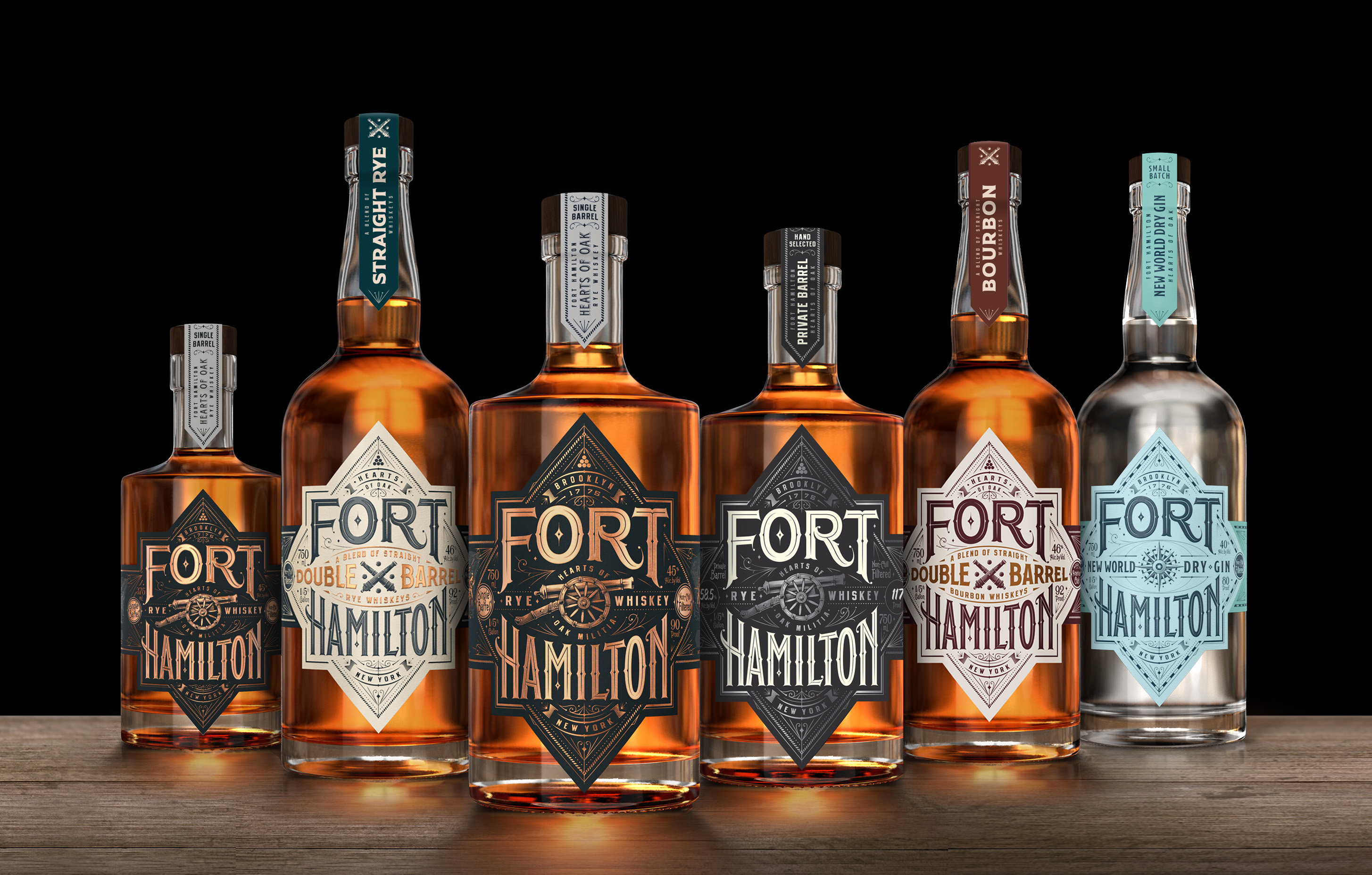 When Alex Clark founded Fort Hamilton in 2016, he had one goal in mind: to make a spirit in the style of America’s original whiskey, a New York rye. While rye was the top libation in pre-Prohibition America, it lost popularity over time—today, most rye is mixed with corn, and it takes a back seat to bourbon in the market.

Clark saw an opportunity to change that, and to celebrate true rye whiskey the way it was first distilled. Six years since the first single-barrel rye went into barrel, Fort Hamilton has a suite of spirits, and a distillery, tasting room, and full bar on the Brooklyn waterfront, in Industry City.

Below, we ask Clark for the story behind Fort Hamilton, why location matters, and what to expect from a visit. Read on.

Tell us about how you got into the spirits and cocktail scene.

I moved to America in ‘98, did finance for a minute and didn’t like that, did music for a while and loved that. Then [my wife] Amy got pregnant, and I was like, time to get a real job—or what I consider a real job, which is bartending. With the Milk & Honey guys, who were central to the cocktail renaissance that kicked off in the early 2000s. They were looking into the original cocktails of America and trying to recreate them as much as possible. I ended up falling in love with the American cocktail canon.

I was learning how to make those drinks, and realizing that rye whiskey wasn’t really available at the time—even though it was the base for all these cocktails. What happened? Prohibition and corn subsidies moved rye whiskey from being the most successful in America before Prohibition to being on the edge of extinction.

And how did the idea for Fort Hamilton come about?

I found myself surrounded by these people and recipes but not surrounded by rye whiskey. And I thought, that’s weird, we should do something about that. I worked at Balthazar for a few years, bartending, and then I left to start a distillery in Brooklyn called Widow Jane, which we brought to life in 2011. I was the Director of Sales, helped develop the brand, and bootstrapped that out of a car to distribution.

They were focused on bourbon, though, and I wanted to focus more on rye. I ultimately left the company to launch my own baby, which turned out to be Fort Hamilton. We put our first product in barrel in 2016, released it in 2017, and that was our first single-barrel rye. We’ve been aging that product ever since, using other people’s equipment and distillery to start with, to keep overhead low.

And in 2019 we signed a lease for our own distillery in Industry City and got that built out by March 2020. By that time Covid was in full swing.

That’s tough timing. How did you keep going?

We got into our space at the end of 2020, but we couldn’t open our tasting room. At the end of 2021, we launched a tour program, which allowed us to be more flexible and shut it down if Covid was making a comeback. That allowed us to get people in the space. And people were like, we want a cocktail after the tour. So I started building out a cocktail menu. We have a great line of cocktails up and running from the tasting room, which change seasonally.

We installed our still at the beginning of this year and have been producing gin ever since. The gin has a Revolutionary War vibe to it as well.

How does the Revolutionary War story come into your narrative?

The original whiskey of America was rye whiskey. And the Battle of Brooklyn started at Fort Hamilton. That’s where the Revolutionary War kicked off, where the British landed their troops ready to quell the American revolutionaries in 1776. They marched north from the site that is now Fort Hamilton. They discovered a watermelon patch and started stealing watermelons, and were busted by Americans who unleashed muskets on them.

We wanted to weave that into the gin story, so we flavored the gin with a little watermelon and cucumber as homage to the original skirmish.

You’re on the waterfront, in a warehouse, and the distillery is named Fort Hamilton. How important is the location—and the history—to your story?

[The location is] the reason we selected that space to start with. It’s very old and industrial from the late 1800s. It’s heated during the winter with steam generators that live in the courtyard between each building, so the whiskey stays warmer during the winter than it would otherwise. We’re trying to make this an authentic recreation of the original whiskey style of America, which involves looking back at historically how people were making whiskey back then. The aging process in the northeast always seems to involve heating winter agents, so that’s key to the authenticity of the product.

Describe the experience someone would have as a visitor on a tour.

We want to showcase not only the brand, but the methodology behind the whiskey that we’re making, along with the process—without being boring. We wanted that experiential element of it.

We do talk about the history of Brooklyn and how that ties into the original single-barrel style that we make, and the history of buildings, and how that affects the flavor. We get into barrels—we show the grain that we’re using and let you taste the whiskey as it’s come off the still. Then we let you taste straight from the barrel, so you get to see the exact effect that the barrel has on the whiskey. We talk about the chemistry of the wood, and about the still and how we make the gin.

Then you get to bottle your own bottle of whiskey! We get on the bottling line and get volunteers to run a bottle down the line: hand label it, fill it, cork it, cap it, hand-write the age statement. And if they want to purchase it after the tour, they’re allowed to do that, too. The whole process gets demystified.

Yes to all of the above. We get couples coming in from out of state for the weekend, people visiting family and friends, groups of families. We get a lot of military vets and active military members, who we offer a 25% discount for everything. They love to come through because of the Revolutionary War history. And Fort Hamilton is still a functioning army base, so we do a lot of work with those guys on the base—charity work, cigar and whiskey nights.

And then we get people rocking up on weekends asking when the tour’s going on, and, if there’s space on the one in an hour’s time, they’ll go knock around. There’s so much stuff to do in Industry City, you can kill an hour easily.

I’m sure Industry City brings in a lot of people.

It’s one of the reasons we wanted to be there. Instead of having to fight for every person who comes through the door, there is a certain amount of visibility that comes with being in Industry City.

What sorts of private events do you see at the Fortress?

Weddings–we’ve seen it all. Pre-wedding parties when everyone’s in town. Corporate parties and team building. We’re going to be doing more of that stuff later this year, with a tour program where you can make your own gin. We’re leaning in on the more experiential stuff, which is what people are into these days.

We have tours with food pairings, and we’ve done ticketed events with Hometown BBQ, which is right across the courtyard from us. You’ll see more of that stuff happening as the year unfolds. We have a lot of barrel finishes coming out, which will be distillery-only offerings. So, a lot of reasons for people to come to the distillery for things they can’t get anywhere else.